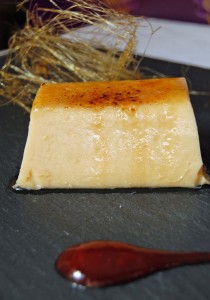 In a medium saucepan, bring the milk, orange zest, cinnamon sticks, and salt to a boil then reduce the heat to low and simmer for 3 minutes to infuse flavors. In a large bowl, whisk the egg yolks with the 1 cup of sugar until pale and fluffy. Whisk the cornstarch with 1/2 cup water to make a slurry and whisk until thoroughly combined.

Remove and discard the orange zest and cinnamon sticks from the milk. Whisking constantly, gradually add the milk to the egg yolk mixture. Return the mixture to the saucepan and bring to a simmer over medium heat, whisking constantly to thicken, about 3 to 5 minutes. Strain the custard into a large bowl and whisk in the vanilla. Divide the custard between 10 (5-ounce) ramekins and smooth the surfaces. Cool the custards slightly, then cover the ramekins with the plastic wrap and refrigerate them until the custard is cold, at least 8 or up to 24 hours

To serve the crema catalana, sprinkle each ramekin evenly with 2 teaspoons of sugar. Use a kitchen torch to melt and caramelize the sugar until browned and crusty. Serve immediately.